This is another response to a troll named Angie who was commenting on this post.

“Out of curiosity, how do you guys intend on addressing the upcoming generation of transgender folks, who’ve transitioned much earlier than the current generation?
I work in an elementary school, and we currently have a 5 year old transgender student. She identifies as a girl, is accepted by her peers as a girl, will likely be on hormone therapy before puberty etc etc. As an adult woman, having lived all but the first 3-4 years of her life as a girl…do you plan to tell her she’s not a real woman because she lacks a uterus? That she’s a man, despite being raised and socialized as female?
When our children come to us, utterly distressed and feeling trapped in the wrong bodies…what course of action do you folks advocate? Knowing that all of the science supports early intervention as the best route to good outcomes for trans kids…that years passing without intervention corresponds directly with rising suicide rates in transgender youth…do you still advocate denying these kids their identities, and insisting biology rules? Or does saving lives play a factor?”

Angie has swallowed trans activist propaganda whole without doing any critical thinking about it and therefore is missing some vitally important information about the “trans kids” that she is talking about. The most important things that Angie is missing about “trans kids” is that most of them will desist in their gender dysphoria as they get older, and that many of these kids are same-sex attracted, and would be considered gay, lesbian, or bisexual if we didn’t have this gender-worshipping social movement going on.

In a study called Factors Associated With Desistence and Persistence of Childhood Gender Dysphoria: A Quantitative Follow-Up Study published in the Journal Of The American Academy Of Child & Adolescent Psychiatry Volume 52 Number 6 June 2013, the authors cited a collection of other studies that investigated persistence and desistance of gender dysphoria and concluded that:

“Many children who experience gender dysphoria (GD), a sense of discomfort from incongruence between their gender identity and assigned sex, will not continue to experience dysphoria into adolescence and adulthood. However, a substantial minority (2–27% across studies) will continue to report GD and may seek services for gender reassignment later in life.” 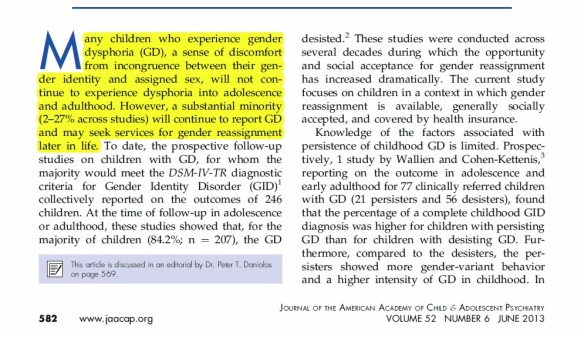 Studies also show that a large percentage of kids with gender dysphoria are same-sex attracted. In the study Desisting and Persisting Gender Dysphoria After Childhood: A Qualitative Follow-Up Study published in Clinical Child Psychology and Psychiatry 16(4) 499-516 2010, the authors noted the high percentage of bisexual and homosexual attraction among the study participants and that people who persist in gender dysphoria after childhood overwhelmingly tend to be same-sex attracted:

“All persisters reported feeling exclusively, and for as long as they could remember, sexually attracted to individuals of the same natal sex…”

The DSM-5 says the same thing:

Note in this screenshot from the DSM-5, it also mentions that less than half of kids with gender dysphoria will still have it when they grow up.

These “trans kids” we keep seeing in the media are very likely, according to the available research, to be same-sex attracted and to grow up to accept themselves as gay or lesbian. This is why Kenneth Zucker, a prominent Canadian researcher in gender dysphoria, advocated for a “wait-and-see” approach.

“Dr. Zucker argued in published research and previous interviews that his therapy should be guided by the age of the patient and based on best evidence, particularly longitudinal studies that showed that gender identity is “malleable” in young children, and that the majority will outgrow their cross-gender identity by the time they are teenagers, and most often grow up to be gay adults.”

Trans activists today do not want to wait and see if same-sex-attracted children will grow up to be comfortable in their bodies and accepting of themselves as gay or lesbian, even though they know this is a likely outcome. They want all children who express a trans identity to immediately be given puberty-blockers followed by cross-sex hormones and taught to believe they are literally the opposite sex. They think that anything else is “conversion therapy” which is yet another reversal of reality. Giving gay and lesbian kids body modifications so that they appear to be heterosexual members of the opposite sex is conversion therapy.

Lupron, the drug commonly used to delay puberty, is not approved for use on children for transgender treatment and is being used off-label with no documented long-term studies of its effects. There are already adults who were given Lupron for precocious puberty who are speaking out against “serious physical and emotional adverse events” such as pain and soreness, anxiety and depression, high heart rate, IBS, memory loss, insomnia, crippling migraines, osteoporosis, and more.

Children whose puberty is blocked and then go on to take cross-sex hormones become sterile, because their sex organs never mature. Also, MtF transsexuals whose genitals never mature may not have enough genital material to even use to create a vaginoplasty. This means they will look like eunuchs, not women.

Our troll Angie asked “how do you guys intend on addressing the upcoming generation of transgender folks, who’ve transitioned much earlier than the current generation?”
Well, here’s the thing, Angie. After all the incredible medical abuse these kids have suffered, I am 100% certain that they’ll be suing the doctors who did this to them as soon as they’re old enough to process and think critically about what happened to them. Sooner or later they’re going to realize that adults failed them by giving them dangerous drugs and telling them that they could become the opposite sex when they can’t, all because they felt uncomfortable with their gender nonconformity and their sexual orientation. They’re going to realize what gender critical feminists have been arguing all along: that it’s not okay to give dangerous drugs to kids and sterilize them, with unknown long-term side effects, just because they were playing with toys marketed to the other sex and with their immature thinking skills decided that this meant they were literally the opposite sex.

So what will I do to address the upcoming generation of people who were given dangerous drugs and sterilized before they were old enough to realize what their dysphoric feelings really meant? Several things: I will listen to them, promote their words, support their activism, and donate to their legal funds when they sue the doctors who abused them.

There is already a growing community of detransitioners, many of whom are lesbians, who are discussing other ways to deal with dysphoria, and I have already started reblogging and promoting them when they provide important information. See the list of detransitioners in my sidebar, and see Carey Callahan’s excellent YouTube channel. We will be seeing more and more detransitioners as time goes on, as more people realize they’ve been sold a bill of goods and decide to reconcile with themselves.

There are some other things in your comment that I take issue with, but they are smaller points than what I have laid out above. For example, you say that a boy can live “as a girl,” and that’s not true, because a girl is a young human female and there is no way for a human male to “live as” a human female. He is simply living in a feminine gender role. The people around him know he’s a boy, so he’s living as a special boy, not as a girl. I also take an issue with the phrase “feeling trapped in the wrong body” because there is no way for a body to be wrong. We are living animals and our bodies are literally what we are made out of and who we are. Bodies are good; we can mistakenly perceive them as “wrong” but they aren’t actually wrong.

Trans activists think that I am hateful, bigoted and phobic for not supporting the idea that some human beings are born inherently needing to take Lupron and be sterilized, but time will tell that it’s the people who promoted medical experimentation on kids who were the hateful bigots. I am in favor of giving everyone an opportunity to grow up in their natural body and accept themselves as they are, so they can have the best and healthiest possible life. Any decisions to make major body modifications should be made as fully-informed mature adults who are acting from a place of self-love and acceptance, not a place of fear and self-hate. Adults who are accepting of themselves rarely will want any body modifications, but if they do, I do not plan to stop them.

Someday the medical abuse of a group of mostly gay and lesbian people will go down in the history books as another method of homophobic gay conversion therapy, just like the lobotomy and shock therapy of previous decades. I certainly intend to support the victims of this form of abuse.

22 thoughts on “How do you intend to address the upcoming trans generation?”